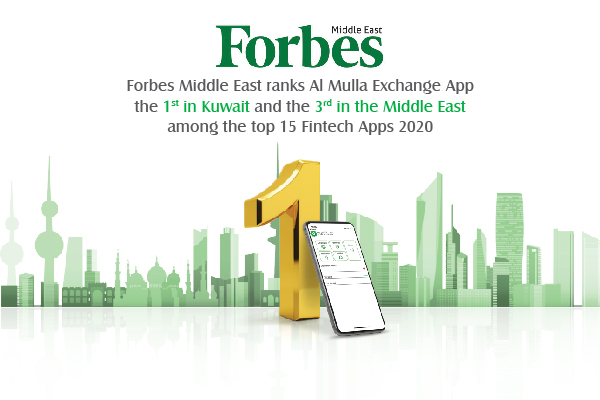 Al Mulla Exchange’s App is ranked as the Number One FinTech application in Kuwait among all financial payment and remittance companies according to the Forbes Middle East Top Fintech Apps List in 2020, and 3rd overall in the Middle East and North Africa.

The companies on Forbes Middle East’s first list of the “Top 15 Fintech Apps” were assessed on their efficiency in helping customers make payments online and remit money across different geographies. Six of the 15 companies are based in the UAE, followed by four in Egypt, three in Kuwait, one in Jordan, and one in Saudi Arabia.

In 2020, Al Mulla Exchange, fully owned and operated by Al Mulla Group, was also recognized as the first remittance and exchange company in Kuwait on the Forbes Middle East “Top Exchange Houses List for 2020”, and in the fifth-place across the Middle East.

A big thank you to our customers who have made this happen by not just using the App but by giving us constructive feedback and suggestions for improvements all of which we have used to keep improving the experience.